I am thrilled to report that Maness Samuel, Blandina Diva and Angella Benjamin, right, of the APU Graduating Class of 2011, have had their student visas approved and are packing their bags in readiness for their long journey to Canada. All three girls have received full scholarship to study for two years in Canada. I will be picking Maness up at the Victoria International Airport and driving her ‘home’ to Pearson College where she will study for the next two years. Blandina and Angella will be arriving on Oct 10th and will be studying at the Northern Lights College in Fort St. John. They will be hosted by the Rotarians of the Dawson Creek Rotary Club. Having met all three of these incredible young women during their graduation in June, I have no doubt that they will be wonderful ambassadors of APU and Malawi. I know that their fellow students will learn a great deal from getting to know them and their world will expand a thousand fold from their experiences over the next two years. Congratulations Maness, Angella and Blandina!
ANOTHER 100% PASS RATE FOR APU JUNIOR CERTIFICATES! 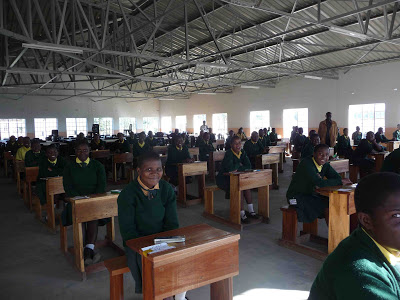 APU’s third class of Form 2 students wrote their JC Examinations in June 2011 and their results have just been announced.  We are so proud to share the news that every single APU Form Two student who wrote the exam passed!  The national pass rate this year in Malawi was 60%.  This is the third year in a row that APU has beat the national pass rate by at least 40%. CONGRATULATIONS GIRLS, YOU HAVE MADE US ALL SO PROUD!