Well, the big day has come and gone and although we feel drained after all of the effort, we are also elated. Every detail of the event was rehearsed many times and the entire three hour ceremony went flawlessly.

Friday was a busy day full of final preparations. The cooks arrived and started preparing the beef, chicken, vegetables and rice in readiness for the feast on Saturday. The DJ arrived with his sound system and we practiced playing the two national anthems, as well as the processional music. The Form Four girls practiced the songs they had written and they practiced filing in and out of their seats and filing across the stage to receive their diplomas. 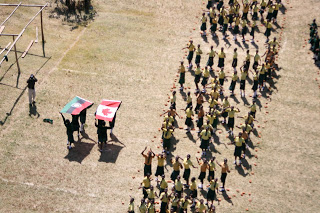 The special APU Alumni Pins were presented to each girl and they were instructed to wear them during the ceremony. The roar they gave off when the pins were distributed was overwhelming! The female teachers remained behind in the hall and put up all of the decorations, set out the chairs and tables, and hung the two flags on the wall.  The hall looked amazing and it took a bit of effort to get the excited girls to go to bed. Graduation day started at 6:00 with the Form 4 girls in full uniform gathering in one of the class blocks.  I handed out the green graduation caps and gold tassles and the girls were over the moon with excitement. The caps were fitted to their heads (It was a difficult job because they kept slipping off – bobby pins don’t work on very short hair!), tassles were attached, and instructions were given as to how to wear their caps. We really wanted them to be wearing the pins during the ceremony. I can’t quite describe their joy upon receiving these very special pins, prepared for them by their Canadian Agogo.
All of the special invited guests arrived in time, including our Guest of Honour, Justice Esme Chombo, and the MP for Lilongwe North, Mr. Titus Malipa, 10 representatives from the United Nations, including Pearson College Graduate John Nsabimana, and the APU Board Members and their families. Our MC was Monica Chanangamuno (APU Malawi board member) and she did an incredible job.  All speeches were translated into both English and Chichewa. The students who presented speeches and poems spoke with confidence and represented APU extremely well. The Guest of Honour is a judge in the supreme court of Malawi.  I was most impressed by her and felt honored to sit next to her.

The girls receiving full scholarships to Pearson College and the Northern Lights College were recognized and photos were taken. The girls received their diplomas with confidence and poise.  Memory, Henry and I, as well as the teachers and board members were just bursting with pride as these 73 young women took the stage one after another, receiving their diplomas with their heads held high. They finished the program by singing one of the songs that they wrote, entitled ‘I’ll Never Be The Same Again’.  I have recorded the song and cannot wait to share it with you all. It is stunning. [When Christie returns, I will upload it to this blog so all the world can hear it.] Following the ceremony we gathered for pictures and then were taken on a tour of the campus by Henry while the hall was reorganized for lunch. During lunch, girls sat with their parents and the special guests and teachers sat at tables with the girls. This is a huge break in tradition, as usually the special guests sit alone in a special room and receive special food.  The food was prepared in the three HUGE pots that APU now owns (one new one and two refurbished used ones).   The servings were enormous but the girls had no trouble cleaning their plates!  A special treat was that every girl received a fanta or coke.
It was truly a time to celebrate.
Take care everyone,
Christie