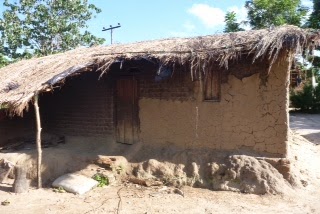 On Friday we went through the side gate of the school and into a different world. Memory and one of our sponsored girls visited the student’s home in Nsaru Trading Centre. Unfortunately her mother was not at home but we did meet her 9 year old brother and 3 year old adopted cousin (the daughter of her mother’s sister who died of AIDS last year). Her father died last year as well. He used to work as a gardener at APU and was well-respected. This was a second marriage for him and this wife is quite young. Unfortunately, after he died, she essentially abandoned the children and only returns periodically leaving the kids to fend for themselves. Their house is a typical one made of unbaked mud bricks and then plastered over to add strength as the sun dried bricks are not nearly as durable as the kiln-baked ones. It has an outdoor covered kitchen on the left and just inside the door is a pantry where food is stored; the containers looked pretty empty.

The living/sleeping room and two small bedrooms were too dark for me to take pictures. Out the back is a pit toilet.

After my last email I was asked to say more about the differences between the world of Nsaru Trading Center and the APU school. I described literally stepping through the gate from one world into another. The contrasts are extreme. At APU the students eat three meals a day; in the village a typical family would eat twice a day. They would get up at dawn (5 a.m.), in order to be out in the fields in the cool of the morning, and return home for a meal  round 10:30 a.m. when the sun becomes hot. They head back into the field late afternoon and work until dusk and eat their second meal after dark. Once the villagers have prepared and eaten their morning meal they would do their  hores, the women hauling water from quite a distance, laying their hand-washed laundry on the ground or on bushes to dry in the sun. 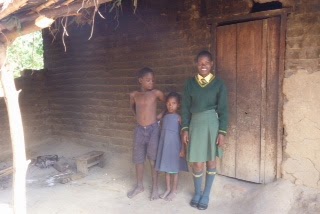 At APU the students also wash their clothes by hand but their water is close at hand. They too lay their clothes out on the grass or on the fences or on  lines.
In the poorest families, such as we visited, the children do not go to school. The youngest ones go to the fields on their mothers’ backs. The small boys are often in charge of the goats and are sent out to find good
grazing. The girls go out in search of scarce firewood carrying huge bundles of it on their head. The women may take soy or maize to the local mill for grinding so that they can make nsima – their staple food.
APU students are fed a diet of nsima, rice, beans, fresh vegetables and fruits, fresh chicken & beef. Poor families seldom have access to meat. Of course there is no refrigeration and the meat we have seen for sale in
the markets is hanging in large pieces covered with flies. When a customer wants to purchase some they slice off a small piece. Some vendors pre-cook the meat. APU actually pays its field workers with maize. Many village men – especially the younger ones – seem to do little else than hang around the market. I gather alcohol is a problem for some and Henry protects those families by paying the workers with maize rather than money. He says many of them have no food in the house and what they earn in a day keeps their family from going hungry. Children without a family, like the one we visited, must forage for food on their own.
APU students sleep in beds with mattresses in buildings with electricity and plumbing. They have access to good potable water from the taps. The villagers sleep on the floor in rudimentary dwellings without power or
plumbing and draw their water from wells or rivers; the latter being muddy and mostly stagnant. It is a rarity to see a home with electricity or plumbing in any of the rural villages.
And lastly, although we have not observed a public school, it is my understanding that the discipline and rigour of APU classrooms, as well as the excellence of the teaching staff, is in sharp contrast to the village public schools where many of the classes are held outside under a tree, where classes are cancelled if it’s pouring rain like it is today, and teacher attendance is sporadic.
That said, the school has had a profound positive effect on the village. More businesses have been started, more girls are attending school in hopes of being admitted here and the general local economy is quite improved.